Winning the War Against Opioid Addiction

Winning the War Against Opioid Addiction

By Kevin Bingham and Alix Michel and David Ward

Summary: We have come a long way in the battle against opioid addiction in a relatively short time, and a better long-term solution could be just around the corner.

As we move forward with winning the war against opioid addiction, it can sometimes be challenging to read the daily headlines and stay positive, especially around the holidays. A December article titled “Drug Abusers May be Injuring Pets to Get Pain Killers” shared how police officers and community leaders informed the Ohio attorney general’s office that people have been abusing drugs rightfully prescribed to pets. The US News HealthDay story titled “Secure Your Prescription Drugs When Hosting Holiday Parties” warned readers about the importance of securing prescription drugs in a safe location before guests arrive. When stories deteriorate to addicts intentionally harming their dogs and to people worrying about holiday guests raiding medicine cabinets, rock bottom isn’t far away.

However, 2013 positioned us well for achieving improved results during 2014. Some of last year’s positive developments include:

3. Physician-led education efforts like the Physicians for Responsible Opioid Prescribing

5. Heightened awareness of the neonatal abstinence syndrome crisis in the U.S.

7. The Food and Drug Administration’s Risk Evaluation and Mitigation Strategy

8. The issuance of the October 2013 Trust for America’s Health report titled “Prescription Drug Abuse: Strategies to Stop the Epidemic”

This article will expand on the last two developments and share some thoughts on what may be in our future when it comes to winning the war on opioid addiction and abuse.

Prosecution and sentencing of healthcare providers

2013 was marked by the successful prosecution and sentencing of healthcare professionals involved in various forms of prescription drug diversion. Arguably the most notable of these was the 39-year prison sentence given to David Kwiatkowski, the former New Hampshire hospital technician who caused dozens of people to become infected with hepatitis C when he injected himself with pain killers using syringes that were then used on patients. Kwiatkowski admitted in August to stealing the drugs and leaving used syringes for hospital use for years, despite knowing he was infected with hepatitis C. His case drew national attention to the problem of prescription drug diversion among healthcare workers; caused a number of institutions to finally take a fresh look at their human resource policies and systems being used to detect diversion; and, has, we hope, sent a strong message of deterrence to all healthcare drug diverters — it is only a matter of time before you get caught!

On an extremely positive note, we are beginning to see NMOs join the fight to help stem the opioid epidemic. On Dec. 10, 2013, the American College of Physicians released a position paper titled “Prescription Drug Abuse: A Policy Position Paper From the American College of Physicians.” The goal of the paper was to provide physicians and policy-makers with 10 recommendations to address the significant human and financial costs related to prescription drug abuse. The recommendations include support for additional education, a national prescription drug monitoring program, establishment of evidence-based nonbinding guidelines regarding recommended maximum dosage and duration of therapy, consideration of patient-provider treatment agreements and the passage of legislation by all 50 states permitting electronic prescription for controlled substances.

In turn, in January 2014, the American Academy of Pediatrics (AAP) Committee on Drugs and Section on Anesthesiology and Pain Medicine issued a report titled “Recognition and Management of Iatrogenically Induced Opioid Dependence and Withdrawal in Children.” The clinical report recommended guidelines for prescribers to follow when weaning children from opioids. As noted by lead author Jeffrey Galinkin, MD, “[t]he key reason the AAP was keen to publish this paper and go forward with this guideline is that people are unaware that patients can get drug-specific withdrawal symptoms from opioids as early as five days to a week after having been on an opioid chronically.”

This recommendation was immediately followed by the Centers for Medicare and Medicaid Services (CMS) Jan. 10, 2014, Federal Register Volume 79, Number 7 publication of proposed rules revising the Medicare Advantage (MA) regulations and prescription drug benefit program (Part D) regulations to help combat fraud and abuse in these programs. The proposed rules include requiring prescribers of Part D drugs to enroll in Medicare, a feature that CMS believes will help ensure that Part D drugs are prescribed only by qualified individuals. As reported by Medscape Medical News, CMS is also seeking the authority to revoke a physician’s or eligible professional’s Medicare enrollment if:

• CMS determines that he or she has a pattern or practice of prescribing Part D drugs that is abusive and represents a threat to the health and safety of Medicare beneficiaries or otherwise fails to meet Medicare requirements; or

• His or her Drug Enforcement Administration certificate of registration is suspended or revoked; or

Furthermore, CMS proposes employing data analysis to identify prescribers and pharmacies that may be engaged in fraudulent or abusive activities. In Table 14 of Federal Register Volume 79, Number 7, CMS’ Office of the Actuary estimates the savings to the federal government from implementing its proposed provisions will be $83 million in calendar year 2015, $132 million in 2016, $171 million in 2017, $364 million in 2018 and $589 million in 2019. 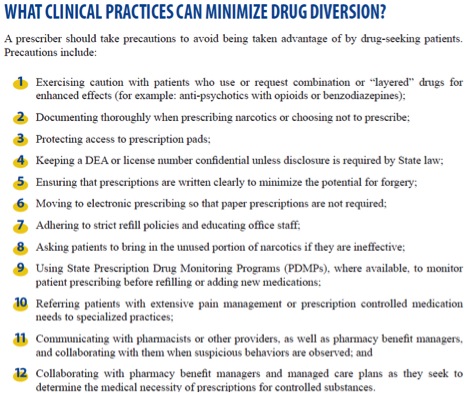 Innovation in our future

In addition to the above efforts, companies continue to innovate and research new ways to address historical challenges.

Vatex Explorations is building a real-time individual-dose monitoring system called Divert-X to reduce drug trafficking, misuse and addictions that result from routine medical care. Divert-X monitors a patient’s individual doses through the electronic transmission of data identifying the time of dose access, location and other measures. The analysis of the data in real time helps physicians and pharmacists identify drug-taking behaviors that fall outside of norms, allowing early intervention before misuse or addiction set in.

In 2012, the Food and Drug Administration approved an ingestible sensor that can be used to track real time data about your pill consumptions habits. The sensor, developed by Proteus Digital Health, was first approved for use in Europe before coming to the U.S. The ingestible sensor is part of the digital health feedback system, which includes a wearable sensor and secure app and is largely focused on serving the transplant population and patients with chronic illnesses. The authors could envision a day when the system could help in the battle against opioid addiction.

Law enforcement continues to push the envelope in finding innovative ways to combat drug diversion. Take, for example, the strategy developed in consultation with the National Association of Drug Diversion Investigators and Oklahoma Bureau of Narcotics to curb false reporting of the loss or theft of prescription drugs in Stillwater. According to a police spokesman, most physicians in Stillwater require patients to obtain a police report before they will write a replacement prescription for lost or stolen medications. This requirement resulted in an increase in the number of police reports filed, but a new problem emerged. How could anyone determine whether those police reports were legitimate? In response, the Stillwater police department created a database to record the names of any individual who reported the loss or theft of a prescription drug. The department now requires the individual to take a polygraph test before it will accept any subsequent report of a lost or stolen prescription drug. Fail that polygraph, and criminal prosecution may follow. Query: If this strategy were employed nationwide, would the medicine cabinet at home be guarded more closely?

There is no doubt we have come a long way in the battle against opioid addiction in a relatively short time. Although there is a lot of road left to travel, 2014 is well-positioned to carry forward the effective efforts from last year. Given the innovative spirit of the U.S. and passion of everyone involved in winning this fight, a better long-term solution could be just around the corner.