In the first quarter 2013 issue of Physician Insurer, our article, “The Opioid Abuse Epidemic—Turning the Tide” discussed what state and federal agencies have been doing to combat this epidemic, and related how physicians and medical boards have been taking action, too, through the efforts of Physicians for Responsible Opioid Prescribing (PROP) and the revocation of physicians’ licenses.

However, the call for change nonetheless continued to build. In December 2012, a Wall Street Journal article, “A Pain-Drug Champion Has Second Thoughts,” told of a prominent pain-care specialist who had strongly supported the use of opioids in pain management in the past, but who had more recently changed his mind about them. The early advocates for strong pain medication had apparently overstated the benefits of these drugs, while understating the risks of addiction. The article notes the reaction of physicians on learning more about recent findings on opioid risk: in one word, they were “shocked.”

In July 2012, PROP submitted a Citizen Petition to FDA, requesting labeling changes for all of the opioid analgesics when prescribed for non-cancer pain. The rationale for the petition
was this: Unfortunately, many clinicians are under the false impression that chronic opioid therapy (COT) is an evidence-based treatment for chronic non-cancer pain (CNCP) and that dose-related toxicities can be avoided by slow upward titration. These misperceptions lead to over-prescribing and high dose prescribing. By implementing the label changes proposed in this petition, FDA has an opportunity to reduce harm caused to chronic pain patients as well as societal harm caused by diversion of prescribed opioids. In addition, FDA will be able to reinforce adherence to dosing limits that have been recommended by the United States Centers for Disease Control, the state of Washington and the New York City Department of Health and Mental Hygiene.

The Citizen Petition was signed by clinicians, researchers, and health officials from the diverse fields involved in the prescribing of opioids. In March 2013, the Drug Enforcement Agency (DEA) endorsed the PROP Petition, filing its own letter with the Division of Dockets Management at the FDA, which stated: The clinical use of opioid analgesics must be accompanied by appropriate measures to minimize the adverse health impact associated with the diversion and abuse of these products. The DEA hopes that FDA will implement suitable measures, such as labeling revisions, to help mitigate the adverse impact on the public health resulting from the abuse of these products.

In May 2013, the National Association of Attorneys General asked the FDA to place a “black box warning” on the labels of medicines in the opioid category of prescription pain relievers, to alert pregnant women that the use of such drugs may harm the developing fetus.

During the past decade, the U.S. has witnessed an alarming increase in the use of opioids. Today, the American Society of Interventional Pain Physicians notes that Americans, who represent just 4.6% of the world’s population, consume 80% of the global opioid supply, 99% of all the hydrocodone, and two-thirds of the world’s illegal drugs. According to the U.S. Centers for Disease Control and Prevention, deaths from overdose of opioid pain relievers (OPR) now exceed the number of deaths linked to heroin and cocaine, combined. In 2009, drug-overdose deaths actually surpassed the number of deaths from motor vehicle accidents, for the first time since the government began tracking drug-related fatalities in 1979.

To counter this rise in addiction, researchers will need to unravel the underlying causes of pain, to prevent it, rather than treating it with potentially addicting drugs. Also, we must understand how to manage pain, when necessary, with therapies that have less potential for addiction—alternative treatments. When they are necessary, we must use the opioids in a manner that minimizes the risk of addiction. Finally, we need better ways to identify those who are seeking drugs for recreational use or resale.

By 2009, the FDA had recognized the scope and severity of the prescription drug abuse and diversion problem. The agency had begun what had been presumed would be a relatively quick process of contacting stakeholders, including the manufacturers of extended release/long acting (ER/LA) opioids, and physicians, to get their input on the problem and suggestions for solutions. FDA also
stated to the ER/LA manufacturers, via a formal letter, the requirements for a new Risk Evaluation and Mitigation Strategy (REMS) to deal with the prescription drug epidemic; within six months of this communication, companies were expected to implement the REMS. Mandatory physician reeducation, FDA noted, would be a part of any future REMS program.

As it turned out, the FDA did not issue its letter outlining the new REMS to the ER/LA manufacturers until April 2011. There, FDA stated that it had “become aware of substantial numbers of post-marketing reports of abuse, misuse, addiction and overdose resulting in fatalities associated with [extended-release] opioid drugs.” Nearly a year later, then, FDA issued its “FDA Blueprint for Prescriber Education for Extended-Release and Long-Acting Opioid Analgesics.”

In the introductory literature that was sent with the blueprint, the agency stated:

FDA has concluded that there is a disproportionate safety problem associated with these products that must be addressed. ER/LA prescription opioid analgesics can provide effective pain management when used as directed; however, there are serious risks associated with patients being prescribed these drugs who should not take them, and with improper use (whether accidental or intentional).

Health care professionals who prescribe extended-release (ER) and longacting (LA) opioid analgesics are in a key position to balance the benefits of prescribing ER/LA opioid analgesics to treat pain against the risks of serious adverse outcomes including addiction, unintentional overdose, and death. Opioid misuse and abuse, resulting in injury and death, has emerged as a major public health problem.

The blueprint details the expectations, and educational goals, for the REMS. Prescriber education is to include:
■ Drug information on ER/LA opioid analgesics
■ Information on assessing patients for treatment with these drugs
■ Initiating therapy, modifying dosage, and discontinuing use of ER/LA opioid analgesics
■ Managing therapy and monitoring patients
■ Counseling patients and care givers about the safe use of these drugs.

Additionally, prescribers would need to learn how to recognize evidence of, and potential for, opioid misuse, abuse, and addiction.

Some observers contend that the REMS was issued too late and without penalties for noncompliance. Admittedly, while it does require ER/LA manufacturers to fund CE activities, the REMS has no provision for mandatory attendance at CE activities, by any healthcare provider. Also, the REMS does not deal with shortacting opioids like Vicodin. But, regardless of these criticisms, we
believe strongly that any effort at education and publicizing the causes and consequences of the opioid epidemic can only help—by pushing us in the right direction.

We still have a long way to go in battling the opioid abuse epidemic. Yes, we need to keep up our efforts in stopping the drug seekers and the criminal activity of physicians looking to profit from the illicit use and sale of opioids. However, the real opportunity now before us lies in helping the hard-working Americans who may slowly, and unknowingly, become addicted to opioids learn up front the danger signs of incipient addiction. For them and their physicians, the real enemy is chronic pain.

Those with chronic pain need to be aware of their other options for controlling pain. Patients need to think of opioids only as a short- term remedy for pain, not a long-term solution. Instead of immediately reaching for their prescription pad, physicians should offer chronic-pain patients non-chemical options for pain control, all the while keeping up the effort to identify and eliminate the source of pain and remaining vigilant for any signs of addiction. The vast majority of physicians want only what’s best for their patients in pain. If we work closely with them, while raising public awareness of the growing epidemic of prescription medicine addiction, surely we can find better long-term solutions than opioids for addressing the issue of chronic pain.

Editors Note: There is more information on www.piaa.us on what you can do to educate family and friends about opioids. 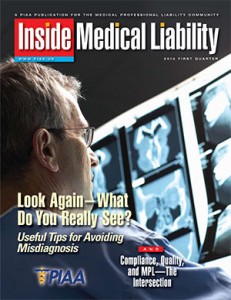